“An exuberant, generous-hearted book about the experience of motherhood and the impact of that experience on her life and work … The writing is intelligent, reflective and touchingly brave … Jackson possesses a novelist’s eye and ear.”

— Carol Shields, The Globe and Mail

The Mother Zone:
Love, Sex and Laundry in the Modern Family

There is no preparation for the alchemy of self that takes place during motherhood.

Two decades before the wave of first-person writing on the soul-shifting experience of motherhood, Marni Jackson published a fierce, funny and passionate memoir that was among the first to explore this terrain. A writer who became a mother for the first time at 37, Marni brought her skills as a journalist, satirist and storyteller to the grippingly banale and epic narrative of pregnancy, childbirth, and new motherhood.

A bestseller in Canada and a finalist for the Stephen Leacock Award for Humour when it appeared in 1992, it was re-issued by Vintage Books in 2010 and remains in print—a perennial, heartfelt and hilarious classic for a whole new generation of bewildered parents. 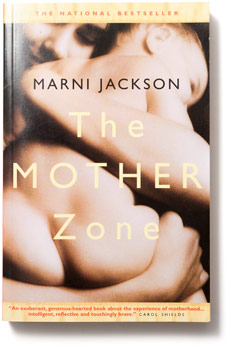 The Mother Zone: Love, Sex and Laundry in the Modern Family
Vintage Books, 1992

Excerpt from The Mother Zone

Amnesia surrounding motherhood is the rule, not the exception.

It appears to be as easy and natural to forget those early days with a baby as it is to erase the pain of childbirth. We become adept at forgetting the real texture of childhood, until mothers are buried in that forgetting too. Best to forget the nights alone in the emergency department, or the intense, too-tiny world of other mothers going through the same things, talking loudly and riotously at a party.

We forget those moments in late November, in the park, wrestling the stroller through the first sticky snowfall as the sun sets and four more hours of building block-towers remain before the baby’s bedtime. Or the sense of having been through so much in one day, and yet of having nothing at all to say to your partner when he comes home. Like a passionate affair that ends and gets redefined as a fluke, a mother also learns to forget the erotic bond she once had with her baby—a perfect intimacy that may never be recaptured. All the raw extremes of motherhood are smoothed over and left behind, on the island of motherhood.

With cunning reverse psychology, our culture encourages this amnesia, simply by excluding mothers from its most conspicuous rewards—money, power, social status. Everything from the shameful wages of day-care workers to the isolation of the at-home mother is evidence of how, despite lip service and pedagogical theories, our culture remains inimical to children and to the people raising them.

So it becomes more rewarding to forget, and the true drama between mother and child is slowly replaced by the idealization of motherhood. The sentimentalizing of her relationship to her children begins—along with the guilt when she won’t, can never, conform to the ideal. Motherhood ideals change from generation to generation but whatever they are—the old having-it-all myth, the new retro-mom fantasies—they will elude her. The real shock is that mothers themselves participate in this self-betrayal. Throughout the writing of this book, I kept confront this.

At 3:30 I stop work, an hour before the party. Many professional writers stop work at three or even earlier, I tell myself. But I’m feeling unsure about the loot bags, so I whip up to the corner and find the perfect hand buzzers, even though the only come four to the package so I have to buy too many. By now I realize that I am quite nervous, as if throwing a huge dinner party for a dozen critical stranger—which, in fact, is exactly what I am doing.

I come back and begin decorating—tacking up streamers on the deck, blowing up balloons, putting the Snoopy paper tablecloth on the table. Sixty dollars of paper and plastic products are ripped open and deployed. I tactfully encourage my son to change out of his too-tight Ghostbusters T-shirt for a more becoming forest-green Aliosaurus T-shirt, with yellow surfer shorts. At 4:20, the first guests arrive early, the parents retreating down the porch stairs at a clip, delighted to be childless for several hours. More arrive, in waves. We work through our agenda of games. I am horrified to find that this takes exactly seventeen minutes. The kids are drifting listlessly through the house, some upstairs rooting through Casey’s toys, others sitting morosely outside in the heart. “I’m thirsty,” says one child, clutching her throat. “So am I,” chimes in another. My palms are sweating.

The phone rings. A hysterical voice, my husband’s, comes over the line.

“It’s the Shriners. I’m caught behind the Shriners’ parade. I’ve got the cake, and it’s melting. You didn’t tell me it was an ice-cream cake. I’ve had to literally tack across town, up to Davenport, down to Dundas… it’s been a nightmare.”

“Do you have the drinks?”

“I’ll give them water til you come.”

Later, his father and I cook and eat two hot dogs, which taste wonderful and remind us of when we last ate. “So,” I say, looking at him, taking him in for the first time that day. “I had to go to three stores to find the pink lemonade,” he said. Well, it may sound deviant, but this sort of thing makes a man attractive to me.