Don't I Know You?

“There is so much to praise in this brilliant collection: Marni Jackson’s daring and intelligence, her gentle humor and unencumbered prose, her eye for the beautiful and hidden, and, above all, her creation of a heroine as appealing and valiant as any I’ve encountered in recent fiction.”

— Barbara Gowdy, award-winning author of The White Bone and Helpless

Don’t I Know You?

What if some of the artists we feel as if we know—Neil Young, Meryl Streep, Keith Richards, Bill Murray—turned up in the course of our daily lives? On the bus, at the cottage, or for a family funeral?

This is what happens to Rose McEwan, a journalist and writer for hire who keeps having strange encounters with famous people. These interlocking stories follow her life from age 17 (when she attends a writing workshop led by a young but already philandering John Updike) through heartbroken bohemia (Joni Mitchell offers timely advice), a decade of marriage, and a zesty post-divorce phase when she embarks on a wilderness canoe trip with Taylor Swift, Leonard Cohen, and Karl Ove Knausgaard.

With wit, insight and impressive craft, Don’t I Know You? portrays a culture in which stars have invaded our psyches. Although cast with familiar names, the stories are all inventions—just as celebrity itself is a form of fiction. “Stars can only exist at the point where their public roles and our imaginations meet,” the author argues. “They may do the work, but we’re the ones who author their fame.” 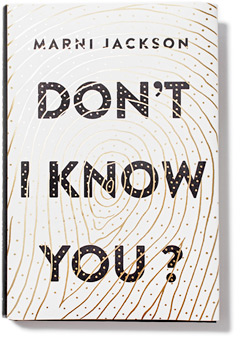 An excerpt from “Don’t I Know You”

The year I turned 28, I spent the summer working in a Kingston, Ontario restaurant where my friend Zalman was the chef. His wife Rose—another Rose, obviously—made the desserts, including a legendary Spanish flan. I was the “salad girl,” washing greens in the deep zinc sink, and sometimes I worked out front too, taking cash or making the fancy coffees (the words “latte” and “barista” were not yet part of the language). Zal and Rose were longtime friends who were hoping that Roberto and I would stay together.

But the break-up was already in motion, like a car rolling back down a hill in neutral. You didn’t want to get in the way of it.

They had invited us to rent the small apartment at the back of their farm for July and August, with the idea that this sojourn in the country might salvage our relationship. A plan that was not working out so far. I had an assignment from Outside magazine that was overdue, and the writing had stalled. It was hard for Roberto, a news photographer from Colombia, to find much work in the small city of Kingston. The mood at home was sullen, and my response was to book extra shifts in order to stay out of the apartment.

During lunch shift one August day, one of the waitresses, came into the kitchen with a bottle of white wine. “This is for you,” Sherry said with a slight eye-roll, “from the boys by the window”.

The hungover guys. They had ordered two double espressos from me when I was out front earlier. I went back into the dining room to thank them, and this time I recognized one as Dan Ackroyd, of early Saturday Night Live fame. I knew his family had a cottage on a lake north of Kingston. But I didn’t recognize his friend, who looked strikingly ordinary. It turned out to be Bill Murray. He had just finished his first season on the show and wasn’t famous yet. This was pre-Ghostbusters too. He was just a guy with nice brown eyes and a roundish nose, hanging out with his TV buddy.

I thanked them for the wine. The three of us kibbitzed back and forth, and then Bill Murray asked for my phone number. Oh that would not be appropriate, I said with a flirtatious smile, swatting him. I didn’t bother to explain that I was living with someone, my waning boyfriend. Then I went back to the kitchen and my sink full of lettuce. At this point, I believe I made a decision, although I wasn’t ready to admit it at the time. The fog of denial, when you are avoiding a break-up, can cover many sins. I dried my hands, wrote my name and number on a piece of paper, folded it inside a fresh hamburger bun, and put it in my apron pocket. As if I had no plans for it.

When I finished with the lettuce, Zal asked me to take over at the cash, which I did, just as Bill Murray and Dan Ackroyd came over to pay their bill.

“If you don’t have a phone, that’s a whole other matter,” said Bill Murray.

Which is when I took the hamburger bun out of my apron and tucked it into his shirt pocket. He acted like this was normal behavior for a cashier in a restaurant and I thought we were just playing out our little scene. It was fun to flirt with someone so nimble, really fun, but by the time I left work later on I had forgotten all about the exchange.

I took the bottle of wine home for another silent knife-clicking dinner with Roberto.

“Any luck today?” I asked. He had pitched a photo-essay to the Whig about the women in solitary confinement at the infamous Kingston Prison for Women.

“No,” he said, and did not elaborate.

The next morning the phone rang.

Bluff called. I dithered and said I had to work. I also explained that I was currently, technically, involved with someone.

“Fine. No problem. So just meet us for drinks,” said Bill Murray.

Well, why not, I thought. I’m an individual. People meet other people for drinks all the time.

“Tell me when you get off work and we’ll pick you up outside the restaurant,” Bill Murray said.

The next day I told Roberto that I’d be working late, and put some eyeliner in my purse.

That summer I commuted everywhere by bicycle, including the 20 kilometre ride from the farm to the town and back. I had long blonde hair, wore Gloria Steinem aviator glasses, and had just come back from a five-month cycling expedition in South America with Roberto, so I was thinner than usual and in good shape. But South America had done us in—it was just too hard, too isolating, a ridiculous undertaking. We had made it up and down the Andes in Ecuador, but we couldn’t make it through dinner in a restaurant. The only problem with breaking up was that the trip, both the hardship and the beautiful strangeness of it, had fused us. Five months in a tent is a micro-marriage.

Roberto was a decent, kind man—a keeper, really. Although I had run away from him at first, now I was utterly confounded by our falling apart. I had decided that it showed a deficiency in me, an inability to love someone who really cared for me, and was deserving of my love.

So I was waiting for something to happen when Bill Murray turned up, live from New York.

The next day, after my shift, I stood with my bike at the corner of Princess and George feeling silly and mildly felonious. A vintage roadster pulled up beside me. It was an eye-catching cream-coloured convertible, some rare model I couldn’t identify. Ackroyd was at the wheel with his new TV pal beside him.

“Hop in,” said Bill Murray. He had a faint constellation of acne pits on his cheeks and lots of wayward brown hair.

“I thought we were going for drinks,” I said.

“What about my bike?”

“Not a problem,” said Ackroyd, who was quite tall, with a sturdy farmboy build. He stepped out and slung the bike into the back of the car. I got in beside it and they began to drive out of town.

“I thought we were going for a drink,” I said again after a while.

“We are,” Bill said. “A country drink.” We were now moving through the outskirts of Kingston, where all the boarding kennels, storage places and car dealerships were.

“I can’t be too long,” I said nervously.

We drove north into stoney, rolling farmland. Late afternoon light slanting over cornfields. Perhaps I’m being kidnapped, I thought placidly. It seemed uncool to ask. It was also, I noticed, a fine day in late August, with goldenrod nodding in the ditches. It felt good to be out of the kitchen and the omelette-y smell of the restaurant. This is an adventure, I told myself, just go with it. Lighten up and live a little. (Years later, this sentiment would be recognized by others who have been similarly hijacked as the Bill Murray Effect.) ….