Don’t I know you?

What if some of the artists we feel as if we know—Neil Young, Meryl Streep, Keith Richards, Bill Murray—turned up in the course of our daily lives? On the bus, at the cottage, or for a family funeral?

This is what happens to Rose McEwan, a journalist and writer for hire who keeps having strange encounters with famous people. These interlocking stories follow her life from age 17 (when she attends a writing workshop led by a young but already philandering John Updike) through heartbroken bohemia (Joni Mitchell offers timely advice), a decade of marriage, and a zesty post-divorce phase when she embarks on a wilderness canoe trip with Taylor Swift, Leonard Cohen, and Karl Ove Knausgaard.

With wit, insight and impressive craft, Don’t I Know You? portrays a culture in which stars have invaded our psyches. Although cast with familiar names, the stories are all inventions—just as celebrity itself is a form of fiction. “Stars can only exist at the point where their public roles and our imaginations meet,” the author argues. “They may do the work, but we’re the ones who author their fame.”

Praise for Don’t I Know You?

“Don’t I Know You? is full of surprises in the best possible way. A premise so unlikely you could never describe it and writing so beautiful you could never believe it. Jackson’s prose is quicker than a mongoose, sharper than a scalpel—and full of read-aloud sentences. She takes the familiar and makes it fantastical and then makes it familiar again. It’s an almost impossible achievement, yet Jackson does it again and again, and—best of all—you never see it coming.”

“There is so much to praise in this brilliant collection: Marni Jackson’s daring and intelligence, her gentle humor and unencumbered prose, her eye for the beautiful and hidden, and, above all, her creation of a heroine as appealing and valiant as any I’ve encountered in recent fiction.”

— Barbara Gowdy, author of The White Bone and Helpless

“Marni Jackson makes a wilderness canoe trip with Leonard Cohen, Karl Ove Knausgaard and Taylor Swift seems like the most natural thing in the world. Don’t I Know You?, with its all-star cast, is one of the most entertaining and emotionally sustaining books I’ve read in a long, long while.” 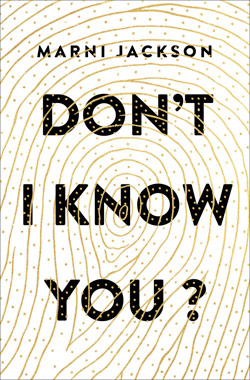