“Home Free, which follows the author as she negotiates the illness and death of her parents, and her son’s alarming neo-bohemian travels and even more daunting attempts to get some traction in a difficult Canadian economy, is a book that is both timely, funny and wise.”

Home Free:
The Myth of the Empty Nest

From the author of the best-selling The Mother Zone, comes a candid narrative about an over-anxious mother and her twenty-something over-adventurous son.

Home Free is about the last secret lap of parenting: getting through your kids” twenties. The boomers who invented the generation gap in the nineteen sixties have grown up to become hyper-involved parents who can’t stop worrying about their adult kids, many of whom are still living in the basement, bartending or getting MBAs and depending on their parents for support, if not rent.

Just when they thought family life was on the wane, parents are back on deck with their twenty-something children. At the same time many are also coping with their own frail or dying parents.

Is this the new face of family, where the young still count on their parents for stability, friendship and guidance in an increasingly unforgiving world? Or has this era of over-invested parents, living vicariously through the achievements of their children, bred an undermining dependency in the next generation?

Home Free is an intimate, candid, reflective and comic memoir that focuses on this new and undefined stage of family life: the challenges of helping our kids navigate their twenties, while learning how to let go of them at the same time. 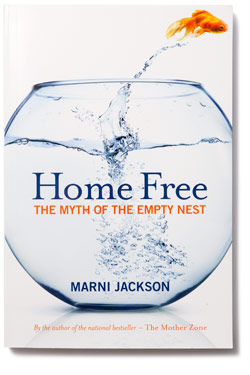 Home Free: The Myth of the Empty Nest
Thomas Allen, 2010

Excerpt from Home Free: The Myth of the Empty Nest

Three years ago, a publisher asked me if I would consider writing a sequel to The Mother Zone. “You must be joking,” I said, “my son is 24 and living in another city”. Then it struck me that I was in the grip of yet another myth: the empty nest. Although my son was going to school in another city, he was often back under our roof, and certainly never far from my thoughts. This was a new and growing suburb of the mother zone. And I knew from talking to my friends that many parents of my generation are deeply engaged, if not ensnared, in their grown kids’ lives.

The moment I said to my publisher that I wasn’t a card-carrying mother any more, I knew it wasn’t true. As a mother, I am chronic. It’s part of the job description, apparently.

Over twenty-five percent of North American children between the ages of eighteen and twenty-nine still live with their families. Many are taking their time to find their way. Yet this is slightly embarrassing terrain for parents, our habit of staying awake until the 23-year-old son comes through the door at 3 a.m., or our delicate manoeuverings to help a daughter snag an internship. We read articles about the listlessness of the “boomerang generation”, their entitlement and lack of direction. We don’t like to consider the possibility that our overparenting might be what’s interfering with their ability to get on with it.

Helping our children make their way in the world isn’t something unique to this generation, of course. Long ago sons automatically went into their father’s business, whether it was stone masonry or innkeeping; daughters married the boy from the next concession. In fact, it might have been only the boomers who proved the exception, when they rebelled against family values, and subscribed to the “generation gap”, confident that they could totally re-engineer human beings, capitalism, and music. It was unthinkable to live with our parents after the age of 20, or to work in dad’s office. We had better things to do. What, I can’t remember.

Now many parents my age have become more invested in our grown children’s destinies and dilemmas than we want to be, or care to admit. I don’t think this is a happy situation for our kids. My suspicion, unbecoming as it is to me, is that we long for our children to pursue and complete the things we used to believe in, but didn’t actually do. The world-changing things, like ending wars and working to improve the lives of women, or fighting poverty. Somewhere along the way, our attention drifted instead to granite counter-tops and organic wine.

But now that some of us are hitting sixty, the future has narrowed. We see the end. Sure, we’re all going to live in funky geriatric communes where we’ll organize great euthanasia parties, with excellent live music. We still have contributions to make to the world (thinning out our ranks, for starters). But… in the meantime, our lifelong, fierce attachment to youth, to staying young ourselves, has found a new focus—our twenty-something kids, and what they can become for us.

If there’s a new generation gap, I think it’s the one between how parents and their grown kids now imagine the future. Getting a liberal arts B.A. and going into the self-employed creative fields, the path I took, now seems as precarious as heading out to sea to catch (non-existent) tuna. The so-called secure professions, in business or finance, are no longer secure. Everyone’s game plan is open to question now. The notion of finding a career that will do you for life and end your days with a pension has become a wistful fairytale. It doesn’t matter what you do; it’s going to be change, and change again from here on in, and we’d better be light on our feet. What sometimes looks like foot-dragging on the part of the young may turn out to be our kids saying “no” to the things that will no longer carry us forward.

That is what I think on good days.

One problem with our family has been our closeness. It’s just the three of us, and we share a lot in common. When everyone in the family likes to listen to Etta James it’s not so easy to break up.

Writing this book was a strange process. I had a strong urge to engineer a good ending for us all. At the same time, writing about my son was also a comfort to me, a way to mutter into my hat and to control the narrative in a way that was impossible, or at least unwise, in real life.

In many ways, the current wave of parents writing candidly about their lives constitutes a new sort of fiction. Each family writes its own book, an alloy of truth, hope and fallible memory, because no parent can write the true story of her own children. Love casts a light on everything that is either too pitiless or too forgiving.

And then there was the business of getting some distance on what was unfolding day by day: almost impossible. As Joan Didion has said, a writer always betrays her subject, sooner or later. This has nothing to do with whether the portrait is loving or critical; it’s the act of pinning someone on the page that is mildly, inescapably treacherous. For me the writing itself was an act of separation that I wasn’t prepared for. But my son was a step ahead of me in that department.

I saw an article in the real estate section of the paper the other day about a mother who was building an adorable little cabin, 10 by 12 feet square, on the property behind her house, where her 24-year-old college-student daughter could live rent-free. In North America, we fret about this sort of thing, but in Italy, this is nothing new; a study published by the London Centre for Economics reported that a mind-boggling 85 per cent of Italian men aged 18 to 34 still live with their parents. Even when the daughters are factored in, the percentage of grown kids living with their parents in Italy is still over 50 per cent. According to a recent Guardian article, one minister has called for a new law forcing “bamboccioni” (mummies’ boys and girls) to leave home at 18. And when they leave, the maternal ties often remain. One bachelor in Rome ships his laundry to his mother in Bari on Friday and gets his shirts back ironed perfectly by Monday.

But what’s wrong with offering our kids affordable shelter in an economy where the unemployment rates among the young are twice what they are for adults? Does this new protracted family life erode our kids’ independence, or are we just helping them tackle a much tougher world than the one we grew up in?

The deal used to be that kids left home at 18 to “find themselves.” Then the day they turned 21 they magically became adults. Many of our parents did just that, putting on shirts and ties, getting married, having babies at an age when today’s kids are still binge-drinking or applying to business schools.

But what if this pattern—leaving home at the end of adolescence—is the real historical aberration, and the current tendency of sticking closer to home for longer periods marks a return to normal? Now that my son and I have met on the other side of the leaving-home dramas, I’ve come to the conclusion that these lingering familial bonds might be a good thing: signs of a return to normal clannishness, after an era of hard-core individualism. This is what struck Casey, too, when he first travelled in Mexico, and everyone he met asked, with a note of concern, “Where is your family?” It’s only a narrow stratum of the world that defines maturity as “leaving home.”